Global equity markets enjoyed a temporary bounce last week
when the US government said it would postpone the imposition
of tariffs on some Chinese goods, while some items would not
be taxed at all. President Trump initially planned to impose 10%
tariffs on $300 billion Chinese imports at the start of next month.
It does show that the Trump administration is worried about
the impact of tariffs on the US economy, and wants to avoid
prices on consumer items jumping ahead of the Christmas
shopping season. However, this was soon overtaken by renewed
concerns over the health of the global economy.

New data showed that Germany’s economy contracted in the
second quarter, which is no surprise since it is heavily dependent
on exports, particularly in the struggling automotive industry.
It is also exposed to China, where July data showed the economy
slowing more than expected, and to the UK, plagued with Brexit
uncertainty. The entire German yield curve is now submerged
below zero, screaming for the tight-fisted German government
to borrow more and spend more. But the country’s leaders
remain committed to the Schwarze Null (black zero) of a balanced
budget. In ordinary times, that might be commendable, but
these are clearly not such times. 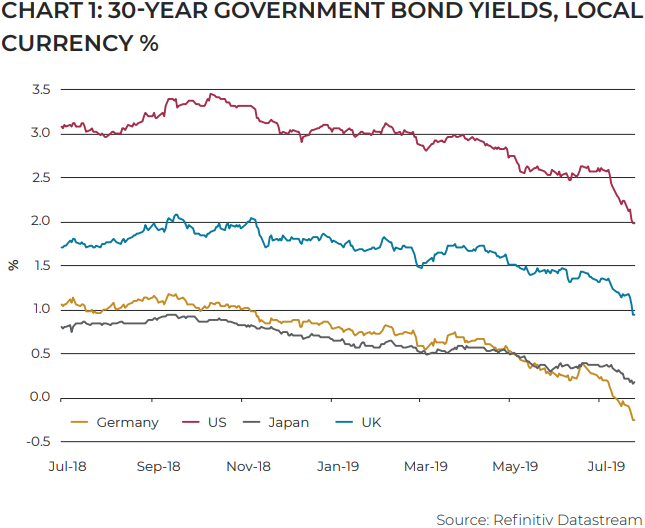 Global weakness saw a rush into the perceived safety of bonds,
with the US 30-year bond yields falling below 2% for the fi rst
time. In other words, the market expects interest rates to be
below 2% for the next three decades, an extreme outcome.
More ominously, 10-year bond yields dipped below 2-year yields
for the fi first time since 2007. This spooked the equity market
as the so-called inversion of the yield curve has preceded past
recessions. Essentially, it means that the market expects the
future to be worse than the present.

It is important to note that the inverted yield curve does not
cause a recession (unless it scares ordinary Americans to stay
at home and stop shopping). Rather, it reflects the bond market’s
expectations of near-term growth, inflation and interest rates
versus longer-term expectations. The near-term expectations
are anchored on the policy stance of the Federal Reserve (the
Fed), so that the market is effectively saying the Fed’s rates are
too high now and it will be forced to cut rates. 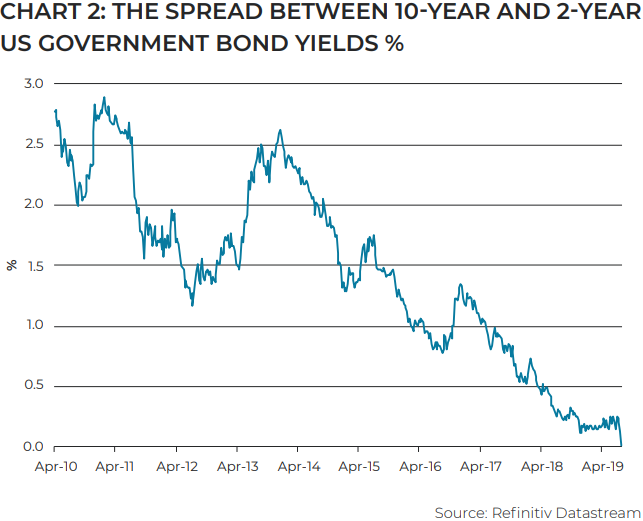 This creates a dilemma: on the one hand, you shouldn’t ignore
the bond market, and the most dangerous words in finance
are said to be “this time is different”. On the other hand, this
time might really be different. No other tried-and-tested
recession indicator is flashing red, and the collapse in bond
yields in Europe and elsewhere must surely play a role in
dragging US yields down. These, after all, are now the highest
yields in the developed world. Canada, Australia, Britain and
even politically-unstable and highly indebted Italy have lower
yields than the US.

This also reflects the relative strength of the US economy. All
the latest reports on the US economy show healthy levels of
consumer spending, supported by a strong job market, low
inflation and low-interest rates. The US manufacturing sector,
along with those in other major countries, is struggling. Despite
President Trump’s efforts, the trade wars seem to have hurt
rather than helped US manufacturers in total (though some
will have benefited). But this is a small part of the services-driven
US economy. The trade wars are also causing pain in other
countries, notably China, where industrial production growth
in June was the slowest in decades (but still strongly positive).

Central banks are of course already cutting rates in droves, with
Mexico the latest major economy to do so. The US Fed is likely
to follow suit at its September meeting. The market will want
to see not only a cut from the Fed, but the guidance that future
cuts would also happen. These rate cuts will not do much to
stimulate new borrowing since global debt levels are already
so high, but will ease the pressure on existing borrowers.
Importantly, central banks will act to prevent a repeat of 2008
when market stress impacted the real economy as credit
channels seized up.

How will the SA Reserve Bank respond? It has already cut rates
once, but this was just reversing November’s hike. The recent
sell-off in the rand might preclude it from cutting at its next
meeting, but oil prices have also pulled back. The Reserve Bank
will also be viewing the deteriorating fiscal position with some
alarm. However, in the current context, the widening budget

deficit is not inflationary, since it is bailing out Eskom, not
stimulating domestic spending. Ultimately, the Reserve Bank
is likely to follow other central banks and lower rates.

This is because in the global dispersion of real interest rates,
South Africa is now close to the one extreme, with Germany
at the other. As global fixed income yields plummet, South
Africa has gone in the other direction. Foreign investors have
pulled money out of the local bond market, worried that
government borrowing will rise dramatically to fund Eskom.

The tabling of a draft National Health Insurance (NHI) bill has
not helped sentiment either. While it has noble objectives, it
would entail potentially hundreds of billions in additional annual
outlays upon planned final implementation in 2026. (The
estimated costs and funding mechanisms have not yet been
announced.) With markets already questioning South Africa’s
fiscal management, the timing was not great. Realistically
though, it is hard to see how such a complex restructuring of
such a large and important sector can be achieved in seven
years, and a more piecemeal approach seems likely.

But a lot of the pessimism is surely overdone. While government
debt is rising due to Eskom and weak tax revenue growth, the
government is far from bankrupt. The increased talk of South
Africa turning to the International Monetary Fund (IMF) for
assistance is also misplaced. The IMF itself sees no reason why
we can’t sort out our own problems without its help. It has
noted that the asset side of the government’s balance sheet
is larger than the liability side, but the assets need to be ‘sweated’,
or sold, to deliver a decent social or economic return. The IMF
helps countries that run out of dollars to repay debt or fund
imports, usually when capital flows dry up. South Africa’s
government debt is mostly rand-denominated and there is no
sign that it is struggling to fund itself in the local bond market.

The flexible exchange rate takes care of the rest. South Africa
is not Argentina, dependent on borrowing abroad in dollars.
Argentina turned to the IMF last year (for the biggest bailout
on record) precisely because the lack of a domestic bond market
means the government borrows in dollars. However, last week
its financial markets suffered a sharp collapse – currency, equities
and bonds slumped between 30% and 40% overnight – after
the reformist President Macri lost a key indicative vote ahead
of October’s presidential elections. Much like President
Ramaphosa, Macri tried to clean up a huge mess left by his
predecessor. However, the medicine he prescribed was too
bitter for the people of Argentina, but not bitter enough from
the point of view of the markets, who have been fleeing
Argentinian assets for the past 18 months. Now it appears Macri
is on his way out, to be replaced by a populist who investors
fear will make things worse, while promising to make things
better.

THE JSE IS NOT THE ECONOMY

It is easy to connect the dots between all this local political and
economic uncertainty and the continued poor performance
of the JSE, but this connection is overstated. In fact, the JSE
has been hit by a perfect storm of events, and virtually everything
that could go wrong seems to have done so in the past three years. The JSE has also performed in line with other non-US
stock markets over the past three years and longer, a period
where only US equities have performed really well (see chart
3).

There is no question that the weak economy has hit
domestically orientated shares, and the NHI bill is another
example of policy uncertainty weighing on share prices (this
time of medical insurers). But more than half of the earnings
of JSE-listed companies is generated outside South Africa. The
global presence of local companies has also increased over the
past few years, with Reserve Bank data showing that domestic
companies invested almost R500 billion abroad over the past
seven years, but without much to show for it. There are several
examples of poor offshore acquisitions, with Woolworths,
Truworths and Famous Brands standing out.

Crucially, JSE exposure to the high-flying US market is low,
while exposure to the UK is relatively high. Overall, the global
exposure of the JSE is concentrated, and subject to company-specific issues.

For instance, Sasol’s problems caused another
sharp pull-back in its share price last week. Last year it was the
40% decline in British American Tobacco and 20% decline in
Richemont. All three are big components of the local benchmark.
This year, only Naspers and mining companies have performed
well, the latter can still largely be viewed as a recovery from the
pre-2016 rout in commodity prices, with the weak rand also
helping. 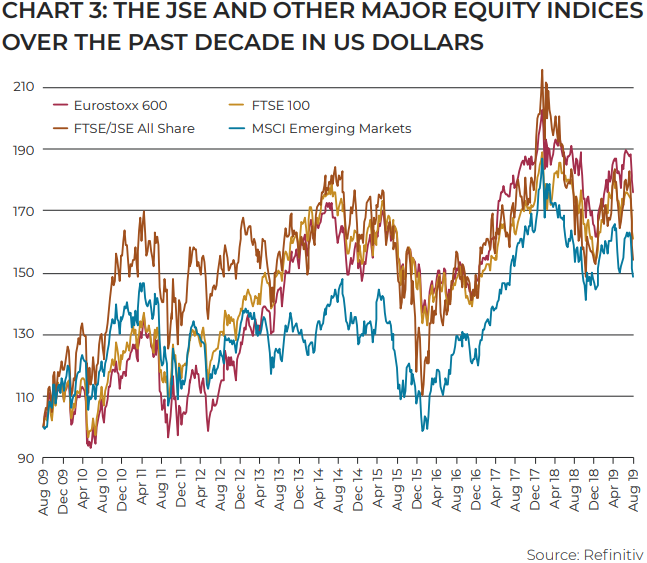 Usually, an equity market sell-off is accompanied by a decline
in interest rates, so that shares become more attractive and
fixed income less. This has happened globally, but not locally.
In fact, high rates are just one of the reasons why local equities
have struggled. Both short and long-term fixed income yields
stand out like a sore thumb in the international context and
offer very attractive real returns. However, the risk remains that
in viewing the poor performance of the JSE as a South Africa Specific story, investors become so mired in pessimism that
they assume it can never recover. Domestic shares already price
in a very gloomy medium-term outlook for the South African
economy and can positively surprise on any evidence of a
slightly improved outlook and a rebound on global equity
markets. 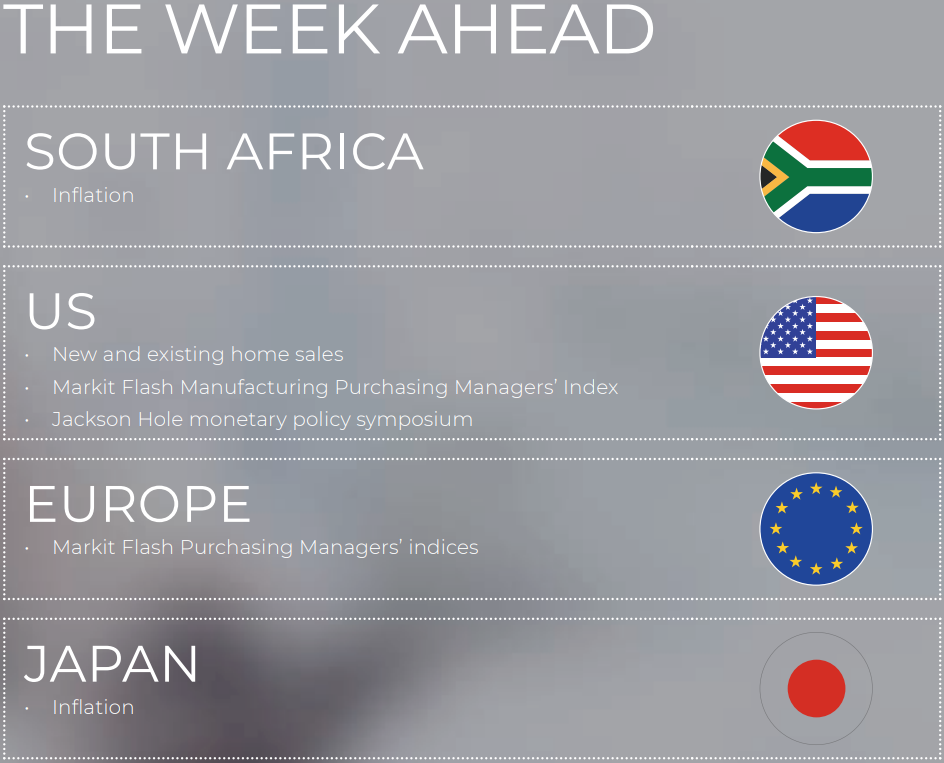